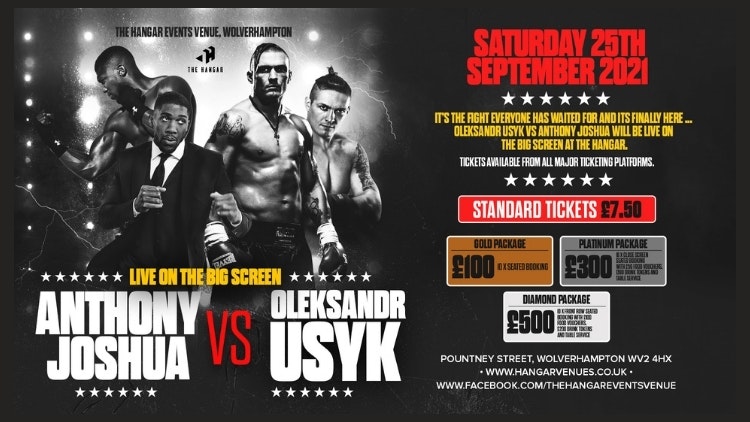 Anthony Joshua VS Olexsandr Usyk LIVE on the big screen

JOSHUA VS USYK: LIVE on the big screen.

THE NEXT BEST PLACE TO WATCH LIVE SPORTING EVENTS

This 12-round heavyweight title fight is set to take place on Saturday, September 25 LIVE screening live at The Hangar.

Anthony Joshua is set to face Oleksandr Usyk next after his undisputed fight with Tyson Fury was put on hold.

Joshua was expected to meet Fury to unite the heavyweight titles this summer but the Gypsy King was ordered to pull out and take on Deontay Wilder in their trilogy clash instead.

AJ has now had to find a new opponent and is preparing to take on dangerous WBO mandatory challenger Usyk later this year.

‘The Cat’ is unbeaten in his 18 professional bouts to date and saw off Derek Chisora last October.
The Ukrainan will pose a hugely tough test for Joshua who must win to keep his hopes of claiming all the heavyweight belts alive.